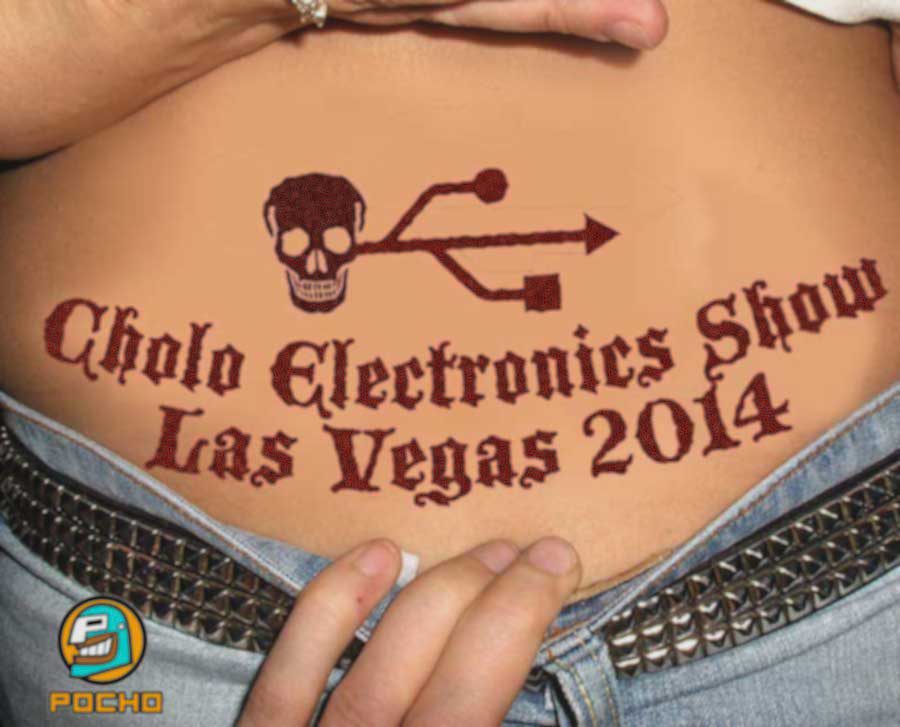 In the “wearables” category, the Skanklet™ Watch — an anklet bracelet smart watch with GPS jamming ability that can remotely scramble GPS signals of other GPS devices as far away, say, as your left ankle is from your right ankle — drew big crowds at their demos, and not just because of their skankily-dressed tatted-up “booth hynas” (photo.) Skanklet™ is the first product from San Diego’s Barrio Loco Soft Juarez.

Any geek can go Google; but the down homie goes Loco™. Roll up in your lowrider and make Google eyes with a distinctive plaid flannel fabric (red or blue) from a well-known clothing manufacturer we can’t name but you can recognize.

Loco Glasses™ are from Santee Self-Help Software in Downtown Los Angeles, and come bundled with a free version of GoogleMaps WeedFinder™.

Wii remains a strong platform choice for game software, and San Jose’s OjoVision’s two new titles Wii Drive By and Wii Shank ‘Em had long lines at their booth as cholos lined up to test their rage against the machine.

El Paso “maker” startup RazaRobot showed off a 3-D printer that was versatile enough to print/extrude a customized car club placa and then a 3-inch filero in under 15 minutes. Depending on the Texas parole board, founder’s representative Chuy “Lil Ace” Mendoza said, the product could ship as early as March.

The conference room at the no-frills downtown El Cortez Hotel and Casino (rooms from $22) was filled with twice the number of exhibitors as last year’s CES, which some observers attributed to California Gov. Jerry Brown’s early prisoner release program and/or a recovering economy, whichever came first.

Excited consumers who made it past the metal detectors packed the hall from the minute the doors opened, 9:30 AM Chicano time, until the Fire Marshall came at 4:20, and then there was that thing with the mad-dogging.