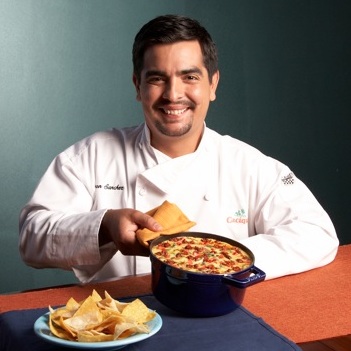 Tia Lencha went to a restaurante with mariachis and micheladas and little mini tacos jesterday. She had more micheladas than tacos, and gwell. Is not her fault. The tacos were spensive and the size for the dolls to eat.

So she stay at home putting ice on her cabeza, drinking the water and seeing the Food Network on the TV. And ju know what? They try to be Mexican for Cinco de Mayo.

The first thing I notice is the Cacique cheese commercial a million times. Not estrange except that the voice of an Americano says to go “awtenteeco” like they are translating for all the gringos. Then what’s his name (Aaron Sancho?) from the eshow Chopped appear and shows food and then says all the words in espanish right.

Then I saw the show Pioneer Woman who was making foods only for herself cause her viejo and her hijos were not in her casa. She made gazpacho, some pasta with leeks (but only the white part of the leeks), and then she made “lazy chile rellenos.”

Tia Lencha hate when peoples call Mexicans or the Mexican food lazy. Is like the chile rellenos were wearing a big sombrero and leaning on a cactus taking a nap. I was a little offend.

Then, she takes the chiles out of a CAN and I get really offend. What kind of person uses chiles poblanos from a can? I don’t care if she’s no pioneers, I think she deserve a coco in la cabeza. Then, she makes a type of layering like lasagna with a lot of cheese and her canned chiles and she put it in a water bath so it don’t get “brown.”

Are ju thinking what I’m thinking? Is that the reason Mexican food is no allowed when her viejo is home? Anyways, I’m happy that she don’t cook Mexican food that much cause it sound very no bueno.

Then I take a little nap and wake up and see Paula Deen, salsa dancing in the kitchen with a chubby Latino guy she dug up, Luis something or other (she made him pronounce his name, and pretend to get all crazy in love when he say it.) He wrote a cookbook and he’s from the Bronx. His book was about how to eat light.

I don’t think the book was working for him or la Paula.

There was frying food and a lot of flirting between the two gorditos, “Paula ju are so beautiful” and “Oh Luis this” and “Oh Luis that” And then she say that she can feel the heat from her deep fryer. I not lying. There was mucho mas innuendos. I couldn’t write them all down cause the room was espinning a little.

Then I was feeling a little like I was going to vomit so I couldn’t get up and turn off the Sandwich King. Me no like that guy.

I had to lie on my sofa while he make a burrito with carne asada and cilantro pesto (no Mexican!) and a salsa (that he says is the best he ever tasted — cause he never taste my salsa, and he never gwill.)

Then he found his “cousin” Joe who looks Mexican but I wasn’t sure until that pendejo Sandwich King puts him to work grating carrots. Another reason I think his Joe is Mexican is that cousin Joe was guapo. Also, cousin Joe pronounced “elote” right and then said his name was “Jose” at the end of the show.

I still no like that pendejo Sandwich King who kept saying “crayma” instead of “crema” and he say Mexican crema is “looser and tangier” than regular sour cream. I not sure if he talking about crema or the womens. Then at the end that pendejo say, “Happy Cinco de Mayo personas!” And then I go and vomit for real.

Then, I come back from the bafroom and I go to turn off the televisión. The nalgona who became the newest Iron Chef is saying that eating spicy food is like driving a little too fast down a road — just the right amount of bad. And then is eat some espicy lamb and say thas “just the right amount of heat” and she is sweating and she say I want more.

Are ju thinking what I’m thinking?