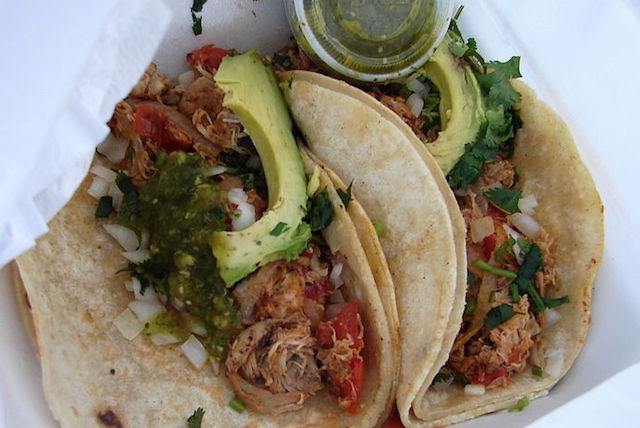 Is Tia Lencha here. Gwhat is Mexican Thanksgiving Day you ask? Is Thanksgiving but with all Mexican food. What?!?! My gringo frends say. Oh no! How you can do that! Is crazy! And Tia Lencha say, no really.

When I help mijo with his homeworks, I learn that Thanksgiving come from a Puritan holiday in Englands. When it was the Reformation the Protestantes wanted to throw away all the Catholic holidays, even Santa Claus and the Easter Bunny!

Gwell, I no happy with that. (I think the Indios here in this country oso no happy with the Puritans who bring disease and then take their land–I just saying.) Anyways, Thanksgiving oso is part of a festival of the harvest and for to celebrate special blessings. So to celebrate when the al pastor taco was invent and oso that the Mexican peoples were the first ones to make the turkey domesticate, I make the turkey al pastor taco.

First you clean the chiles and cook them in the vinegar. When they is cooked, you grind them with the garlics and the rest of the espices to create a paste. Taste to see if you need to put more vinegar or salt. Put the paste to cook again, stirring so that it don’t stick.

Put a bit of jugo de piña (pineapple juice for you pochos) with the paste, and smear it on the turkey esteaks, but you really have to rub it. Ja ja. Put the turkey esteaks on top of the other and let them rest for five hours. This make it sexy.

I use the turkey steaks cause they are easier to cut. Supposably, now turkeys are grow so they have really big breastes and cannot have babies even if they try. Like mijo’s daddy’s new gwife.

Oso, cause the turkeys don’t taste like nothing, they take the flavor of the espices very mucho. My abuelita tole me that in the ole days on the rancho, the turkeys taste good. She used to give the turkeys nuts, almonds, fruits, raisins, candy, and sometimes gwine to eat before killing them with her hands. She say she use to chase the turkey until she catch it and grab it by the neck. This remind me when my mijo’s daddy use to give me gwine before he try to do you know gwhat to me, which no too different from being slaughter. I just saying.

Anyways, after you marinate the turkey, you cook it with a little oil, but only halfways. Then you take out and cut the turkey in little pieces and you finish cooking, but you add the chop onion.

You serve with tortillas, and the chop cilantro and onion. You can oso have some salsa (no too hot for you pochos) and a limón cut in half. I oso like to chop and put little pieces of the pineapple in the tacos. Is good!

O, and Tia Lencha almos got a novio when she made these turkey al pastor tacos last year. There was a man who smell the tacos.

He say, “Oh Lencha, the food smell so good.”

Then we go out and he stuff me with food and wine like a turkey on the rancho. I know then what was gone to happen next. In his car, he put his hands on me like I was a turkey esteak he try to marinate.

He look at me like I crazy and he no call me on the telephone. Maybe cause he didn’t know the recipe?

Tia Lencha is a bloguera, too, doncha know. And jes, we have run this recipe before. It’s that good.