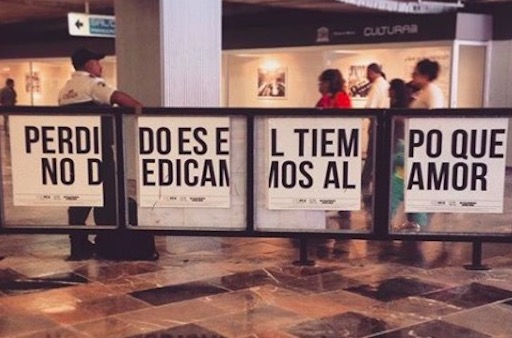 Last Sunday night my dad picked me up at the San Diego Airport after my nine-hour, one stop in Houston, flight from Mexico City, and my uncle called over the Bluetooth and started chatting about his recent visit to my city of residence.

“At first I was afraid to be walking around el Centro, but after a few days I got over it.”

If a Pocho who lived in CDMX for over 20 years fears a short trip back to Mexico City, then what are the rest of us Millenial Poch@s out here supposed to do to conquer this? Have no fear!

The Pochas Guide to Mexico City is here!

If you’re reading this it’s because you’ve been to or want to travel to Mexico City. You’re probably browntown, like me, have serious issues with your aging parents because of the cultural differences between their lives immigrating to the U.S., making a happy, safe life for you, and your upbringing as a spoiled, “rich”, American kid that talks back to your parents in English right before you get slapped in the mouth in Mexican, for disrespecting an elder.

All the fantastic guides and stories you’ve read about Mexico City have filled your vacation dream journal with all sorts of ideas on the best places to eat, sleep and party, but, after a year and a half in the very center of the place many of us tenderly call, El Monstro, this is the advice I have for you on where to eat, how to get robbed, where not to go, and what to bring with you to your first, real, Mexican party. Plus a couple other pieces of advice.

First. How to get robbed:

Give your assailants everything on you. If they’re just after your iPhone, let them know you’ve got 500 pesos in your pocket so that they can take that too.

In less than a year living in Mexico City, I lost three iPhones. One drunkenly left behind in a cab, one stolen very sleuthly (I applaud the maestro thief) on a metro when my hands were full with the best Chinese food in CDMX, and a third ripped out of my hands while I was being choked out in front of my building.

Why does this happen and why should us Poch@s keep bringing iPhones on vacation to Mexico? Because it’s all part of the trickle-down theory of economics that the current US administration has been advocating since the beginning! Your ubiquitous iPhone propels an entire re-sell industry right in the Historical Center of Mexico City. Your “Omg, where’s my phone” moment has fed an entire family for three weeks.

Consider having anything robbed non-violently from you in Mexico a sort of gift/tax to your host. If you prefer to skip this step, buy a burner phone that looks nothing like an iPhone and bring that with you on your trip.

Second. Where not to go:

Everything about Mexico City is hipster as fuck; the colors, the food, the photo ops with 30 Sid stuffed animals. You do not need to go to Condesa to get your hipster fix. And as a Poch@, why spend your vacation in a neighborhood where you’re going to be surrounded by tall-ass white people speaking English, just like home!

Live a little, go on a real vacation, and book an Airbnb in any other neighborhood in Mexico City. Name any of your favorite spots to shop, eat, drink in Condesa and I can name TWO equally good spots outside of Condesa.

Where to Eat: Taqueria el Progreso

Mexico City tacos are nothing like the tacos you grew up eating at home or at your favorite taco shop stateside. You’re gonna feel a little homesick and confused at first, but eventually, you’ll get used to and learn to love tacos de canasta, tacos de guisado, and tacos de arrachera. If you’re feeling homesick for some Cali style, Chicago style, or New York style taco shop tacos, I suggest you swing by Taqueria el Progreso near the Monumento a la Revolución. You can get a carne asada taco here (gotta call it bistek or they’ll know you’re a Poch@) on a flour tortilla, slap on a fatty spoonful of guac and it will be delectable. Of course, they’ve got regular tacos too, as well as the classic free add-ons of a Mexico City taco, beans, salsa, lime, and mashed potatoes, so you’ll still be having an authentic CDMX experience, no worries.

Where to Party: El Barba Azul

For this adventure, you’re gonna want to bring along your Mexico City cousin to help guide your night. If you don’t have one, that’s okay, but bring a buddy for sure, preferably someone who knows and loves how to dance salsa and cumbia. You’re going to be delving into the beautifully sketchy little hood south of Centro Historico called Obrera. (Obrera is also where my favorite pozole is but that’s just because I’m into Jalisco style pozole blanco.) This will be a night of live music, dancing and drinking, so bring cash, but make sure to leave passports, credit cards, all that jazz at home. This spot does takes cards though, so if you’re a responsible drinker, by all means, bring your wallet and I do recommend having a designated sober friend to make sure you don’t get overcharged on the bill. Barba Azul gets hopping around 11 or later at night. You’ll order a bucket of beers, dance, drink, wobble upstairs to the bathroom, dance, drink and dance until maybe 4 in the morning. Enjoy. One of my favorite spots. Oh yeah this is also an old cabaret, you can pay the ladies to dance with you, there’s still a bit of a prosti vibe, but on my last visit the doorman assured me the owners have consciously been curbing this activity in order to keep it safer for their less seedy clientele.

What to bring to your first real Mexican party: Snacks

When real Mexicans gather to drink chelas, there is always botana. Lays covered in lime juice, tajin and worcestershire sauce, peanuts, chips, dried plantains, takis, you name it. You know the party is over when there’s no more botana so make sure you bring snacks with you along with the customary alcohol you are going to imbibe. Oh and don’t forget, you have to kiss and shake hands with every person in the room when you arrive and when you leave.

Who are you? (In Mexico versus your US hometown I mean)

In Mexico no matter your skin color you are a guer@ if you are a customer. Don’t be offended.

You are also a fresa. You will try to pretend you’re not because of a lifetime of being the poor kid in a wealthy country but when you’re on vacation in Mexico, you’re preppy dude. Don’t be a dick about it, tip well.

You’re Mexican! It is going to feel so good to blend in with the crowd, be taller than a lot of people, not have to worry if you’re being treated differently because of your brown skin (just don’t speak too much or you’ll give it away) and if you decide you want to dye your hair blue to stand out, it’s super cheap and totally acceptable in Mexico City!

One final piece of advice from one Pocha to another.

People growing up and living in America are fat because of conservadores and not preservativos. If you make the horrible mistake that I did and say Americans are overweight because of preservativos, you are so hilariously wrong.

You’ll make many of these mistakes, make note every time someone laughs at your Spanish, it’s an invaluable grammar lesson.