Praise the Lord and pass the ammunition.

Like a Biblical prophet of doom, a God-fearing Christian Conservative who tracks “Degenerate Culture” is trumpeting the news of a clear and present danger:

Hot and spicy tortilla chips are destroying the AMERICA WE LOVE WHICH USED TO EAT LOTS OF PATRIOTIC POTATO CHIPS NOT THESE ADDICTIVE ALIEN ABOMINATIONS. 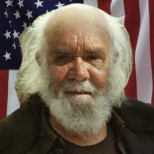 Derby Mac (An American Patriot who has dedicated his life to loving his country and preparing his family for the National Apocalypse. He would like to thank the Founding Fathers, President Reagan and Jesus Christ for the opportunity to share Wisdom) writes:

They’re dark. They’re spicy. They’re one of the most alluring treats in our food aisles today. For a child, they’re something fancy, like attending a birthday party in a collared shirt.

For a man home alone, a single bag is as good as an entire meal. But what are we really getting ourselves into with these flashy foreign snacks?

Should we be at all concerned that Doritos are now more popular than good old-fashioned American potato chips?

There are close to 20 million illegal immigrants in the United States right now. The vast majority of them have come from south of our border. We’re talking Mexicans, Colombians and Dominicans.

These are the sorts of people who eat barrels full of “tortilla” chips on a daily basis in their native barrios. It’s a world of crime and corruption, lewd sexuality and 100-degree temperatures. Tortilla chips were designed for exactly this sort of harsh lifestyle.

No need for forks or napkins, the “nacho” chip can serve as both! You can wipe the salsa off your mustache with a nacho. Their sharp-pointed edges are a handy weapon if you’re fighting over a bowl of dip.

When people argue with food in their hands, the most common snack used is the nacho chip. What better to drive the point home, to pierce the air with stabby motions as you yell and flail about! Have you ever seen that happen with a Ritz Cracker or a Velveeta Slice? Of course you haven’t!

Many people don’t realize that the symbolism of the Dorito doesn’t end in Mexico. If you look at its basic form, what is it? It’s a triangle!

Triangles are not an American shape. We are a country of stars and stripes, circles and crosses. The triangle evokes visions of far-off pyramids and occult rituals. In fact, the triangle is one of the key icons of the Illuminati. Is it really any coincidence that you can quickly make a Satanic pentagram on any table surface with just five Dorito chips?

Continued @ HardDawn.com… We got the triangles screen cap from there, too.