The sudden contamination of Mexican Peon wear that attires  certain former male members of the institution now threatens to place the college under the jurisdiction of the Mexican government. The step is in reality an act of charitable contribution on the part of the men of the school whose sympathies have been aroused for the plight of their former classmates.

The cause of the whole affair seems to lie in the effects of recent strikes among the customers of the clothing industry. Hard times of after war conditions has lead to the most stringent economy so that instead of purchases in new fall lines most men have gone into the attics and donned last year’s suits.

Unfortunately however a number of “men” have had to resort to Peon Pants for leg attire. The fact that the purchase price of the garment is considerably less than the cost of a new suit makes it appear as though conspiracy entered into the crisis. The trousers are made of the finest and most dainty materials and need constant looking after and so that in one branch of the clothing industry a solution has been found. Business is “pressing” ten hours a day — and there seems to be no let up in the immediate future. 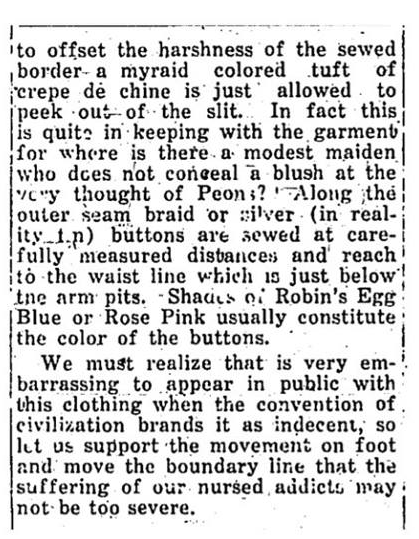