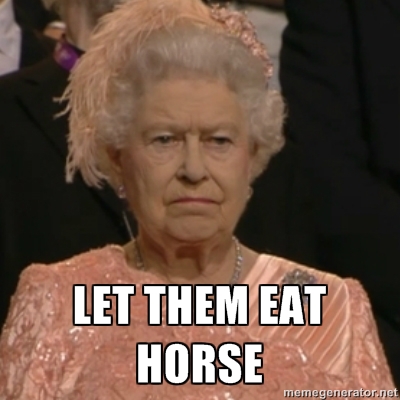 “Let them eat horse!” she proclaimed Sunday before being admitted to King Edward VII hospital in central London.

As a result, Ye Royal Foode Inspectors Office will announce later today that it is perfectly acceptable to consume “beef” products “containing up to 30% equine DNA and 5% Camilla Parker Bowles.”

In Berlin, a Gallop poll claimed 53% of Germans agreed with the statement “Horsemeat gives me the trots.”

Parisian cafe habitues, however, were all sangfroid. While “biftek frites” remains popular on French menus, many are opting for a lower-priced ground-meat cutlet know locally as “the cheval you rode in on.”

Further north, mega-retailer Ikea has introduced Swedish Horseballs to their in-store cafes, served, of course, with dingleberries. A substantial portion at a nice price, we might add.