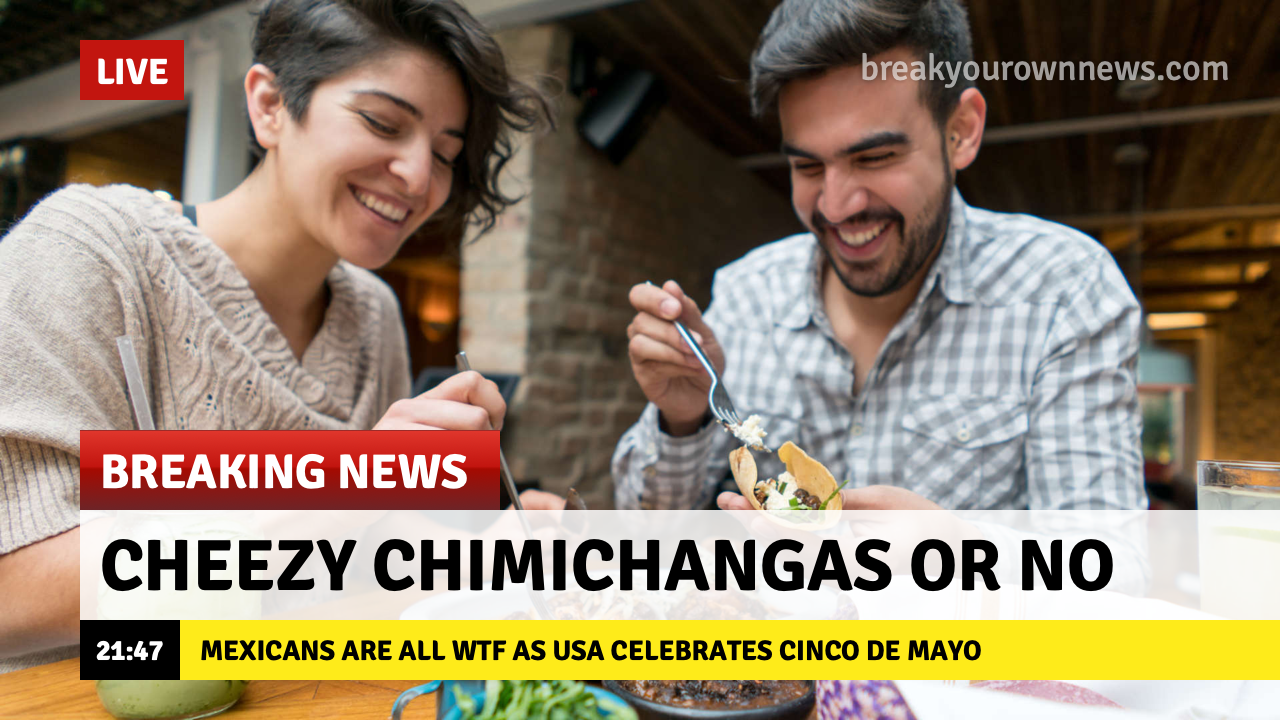 “Is because of the Battle of Puebla,” I tole him.

“Do people in Mexico get borrachos and crazy like they do here in the United States?”

“Crazy? No. The kids get day off from eschool and then some mens dresses up in the pueblo of Puebla and play like is the battle happening again.”

“No, is more like kids eating candy and washing TV.”

“Is it about Mexican people being proud of their culture?”

“No,” I say. “I’m no proud of gringos gwearing sombreros and eating chimichangas.”

“I don know. I never ate one,” I say. “But the gringos love to eat the food with all the cheez I don know what it is.”

“You don’t know what cheese is?”

“A course I know what cheez is, I know queso fresco, and panela, cotija, Oaxaca cheez…but I don know what that other cheez is that they put melt on top of everything.”

“What you have against margaritas, mijo? Ju know jur mama likes the margaritas.”

“A little too much.”

“Jes, maybe a little too mush.”

“You know what I think, mama? I think Cinco de Mayo is fake news.”

“When was the first celebration of Cinco de Mayo?”

“Gwell, the battle of Puebla was in 1862, when jur abuelita’s abuelita was living on the rancho.”

“Have ju been on the Google again?”

“No, I was doing my history homework. I learned about how people here didn’t like Mexicans.”

“Oh! Jes. I know. Your tatatatatara abuelo live in California. He no like it.”

“Didn’t they burn the town where he lived to take his land?”

“He say that he was sleeping at night and he woke up and ran away. He almos roasted like a chile.”

“Why do you think then that this country would celebrate Mexico if they don’t like Mexicans?”

“The Civil Gwar? With the Abraham Lincoln, and the eslaves? Okey.”

“And the Mexicans beat the French in the Battle of Puebla.”

“And the French were on the side of the Confederate Army during the Civil War.”

“The Confederates, in the south.”

“They were the ones who wanted the eslaves?”

“So when the Mexicans beat the French in Puebla, it helped the North so that the French would not help the South.”

“Don’t you think it’s a coincidence that the first Cinco de Mayo was celebrated in 1863?”

“So jur saying that Cinco de Mayo is no about Mexico?”

“I’m just saying, if the Civil War weren’t going on, would anyone care about the Battle of Puebla?”

“Is this a Confederate theory?”

“You mean conspiracy theory? No. This is just fake news.”

“Mijo, I don know if ju should algways be on the Google.”

“Would you make me a quesadilla, mama?”

“Jes, mijo, a course. But no with that orange stuff you call cheez.”

So to my readers on the Google, there gwill be no Cinco de Mayo recipe this jear. I am support my mijo’s theory of fake news. He get an A in history all the jears, so I do what he say and read the history.

I gwill give ju a tip for Cinco de Mayo. Gwen ju make a quesadilla, ONLY use a cheez that has a name that is hard for you pochos to pronounce. No Monterrey Jack or Cheddar. If the cheez sounds like the name of a guy wearing a sombrero, don use.