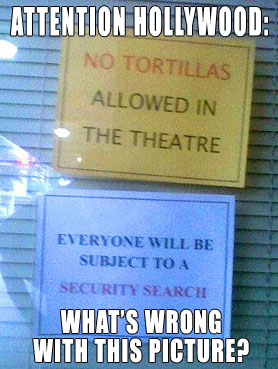 Okay, time for a reality check.

Despicable Me 2 made $59.5 million in its first two days of release. Do any of you seriously believe that Universal gives a flying fuck if Latinos are upset over the negative stereotyping of a Latino character ?

We Latinos can yell, scream, jump up and down, stand on our heads, do somersaults and they still won’t care. The movie is on track to make hundreds of millions of dollars for Universal.

Year before last, Ron Meyer, the head of Universal Studios, spoke at a NALIP luncheon and told us to our faces that Universal doesn’t make Latino-themed or Latino-starred movies because Latinos don’t go to see them. And you know what? He’s right. Latinos are almost 40% of the all important opening day box office. Unfortunately, Latinos go to see Harry Potter, Lord of the Rings, Transformers, Star Trek, Star Wars, Iron Man, Batman, Spiderman, anything but Latino-themed movies. What’s the solution?

Let me ask you a question. How many of you bought a ticket to see A Better Life? How many saw La Mission, End of Watch, Gun Hill Road, Tortilla Soup or La Misma Luna? How many of you own a DVD of La Bamba, Stand And Deliver, The Milagro Beanfield War, Selena, Luminarias, Mi Familia or Real Women Have Curves?

How many of you watched or own a DVD of Resurrection Blvd., American Family, The Brothers Garcia or Greetings From Tucson? How many of you have gone online and watched Los Americans, Sin Verguenza, East WillyB or East Los High? Be honest. Now, there’s probably going to be a higher percentage here because I’m preaching to the choir. But there will still be a lot of you who haven’t seen these films and shows. Therein lies the problem. We should all have seen or at least sampled all of these and many more.

No one is saying these are the greatest shows ever made and not everyone is going like every show. Personally, Machete is not my kind of movie and I didn’t care for much of it, but I was there to see it opening weekend. And therein lies the solution. If Latinos will make an effort to watch and support Latino-themed projects so they make money – BECAUSE MONEY IS THE ONLY THING THE STUDIOS AND NETWORKS CARE ABOUT – then we will get the opportunity to make more Latino-themed films and television.

And the more projects we get made, the better they will be, because making hit movies is a numbers game. Also, the budgets will go up and they might even put more P & A dollars behind the projects so Latinos, WHO RARELY PAY ATTENTION, will know that there is a show out there that is for and about them. Like every show.

This will also solve the chicken and the egg problem – movies make stars and stars make movies. There will be more Latino stars who the studios will want to make movies with because these stars will make money. Right now we don’t have a Latino Brad Pitt or a Robert Downey, Jr. or George Clooney or Tom Cruise or Sandra Bullock or Helen Mirren. And don’t say we do because we don’t. We don’t have one star the studios would be willing to hang a picture on. We did have JLo, but she appears to have used up her chances with the bad choices her people have made for her.

All of this is the long-winded way of saying one thing: WE NEED TO BUILD OUR OWN MARKETPLACE.

Repeat after me: WE NEED TO…

Okay, you get the idea. African- Americans have done it and Latinos can do it, too. That’s why they have OWN and BET and Oprah and Tyler Perry and Denzel Washington and Will Smith and on and on and on. Hell, they even have their own president. I’m just kidding. He’s my president, too.

So, next time there’s a Latino-themed or Latino-starring project, what are we going to do? At least give it a damn chance.

And stop tearing things down before you’ve even seen them. Was ROB great? No. But Rob Schneider’s heart and idea was in the right place and it created a lot of jobs. Now CBS doesn’t want to go anywhere near a Latino project. Can you blame them? Is Devious Maid great? No. But it’s no worse than a lot of other crap that’s on television. And it creates a lot of jobs for Latinas, who might become bigger stars and maybe eventually get something worthwhile made. We’ll forgive Eva on this one.

One more time, what do we need to do? BUILD OUR OWN MARKETPLACE!

Trust me on this one. It will be our ticket into the game.

Republished with the permission of our friends at LatinoLA.com. ¡Gracias!

¡MIRA! A REBUTTAL by Linda Nieves-Powell: Latinos in Hollywood? First of all, who are these so-called ‘Latinos?’