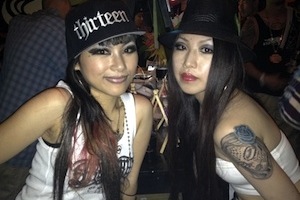 Is brown the new black?

That’s the question POCHO asked in a massively-popular photo essay that featured Japanese women who dress like cholas. They make ‘gang’ signs, they pose and they mad-dog the camera. Is this a good thing?

Political coverage broke most of the ñews this week as just-released-from-Twitterham-jail @MexicanMitt Romney debuted a music video and had lots to say about the Democratic Convention in Dixie, especially that Bill Clinton guey.