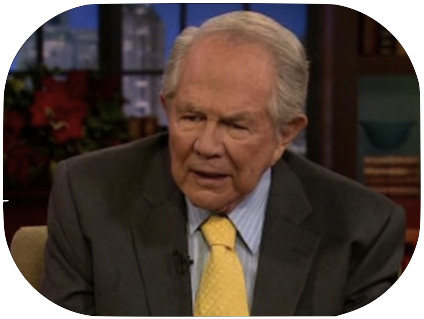 (PNS reporting from VIRGINIA) Rev. Pat Robertson told viewers of his 700 Club last night that Tropical Storm Isaac’s assault on the GOP National Convention in Florida is a warning to sinners.

“You goddam shit-for-brains idiots better pay some goddam attention or our Lord and Savior is gonna whip your sorry asses,” Robertson said. “Do you douchebags really think Our Father Who Art In Heaven will let you get away with this shit?”

“Jesus is cheesed the fuck off!” he told the estimated one million viewers of his Christian Broadcasting Network religious talk show. “Our glorious vengeful God is as angry as a hornet in a henhouse. He’s up in Heaven high, saying, ‘You little pussies, you don’t hate the homos enough! You let ’em get married ‘n’ shit? You are slacking off. I will now drown you. Enjoy the flood, mothafuckas!'”

“I’m talking to you, bitches!” he added.

Robertson then went into a two-minute tirade on God’s weather plan:

This hurricane may be a blessing in disguise. … Something happened a long time ago in Florida, and people might not want to talk about it. Floridians were originally under the heel of the Spanish. You know, Queen what’s her name the third, or whatever. And the people of Florida got together and swore a pact to the devil. They said, we will serve you if you will get us free from the Spanish. True story. And so, the devil said, okay it’s a deal. Ever since they have been cursed by one thing after the other. I mean, just look at the goddam place. Holy shit! Am I fuckin’ right, people?

I would warn you jerkoffs in Tampa that you’re right in the way of some serious hurricanes, and I don’t think I’d be waving those little Hindoo elephants in God’s face if I were you, This is not a message of hate — this is a message of redemption. But a condition like this will bring about the destruction of your gay-ass nation. It’ll bring about terrorist bombs; it’ll bring earthquakes, tornadoes, and possibly more Mexicans.

So I’d like to say to the good citizens of Tampa: If there is a disaster in your area, don’t turn to God, because you just deported him from your city. And don’t wonder why he hasn’t helped you when problems begin, if they begin. I’m not saying they will, but if they do, just remember, you’re not being hateful enough. And if that’s the case, don’t ask for his help because he thinks you’re a bunch of queerbaits.

Bottom line? Repent like your lives depended on it, because they fuckin’ do! In Jesus’ name. Amen.