PNS: How did you end up having a book signing at Guantanmo Bay?

S. J. Rivera: Well, right before the release of Amerikkkan Stories, I was celebrating with family at home and cooking some SOPA (my favorite.) Next thing I know, the FBI kicked my door in, told me to drop the tamales and then seized all the SOPA. My abuela cried so hard that day – it was her recipe. I ended up in Guantanamo Bay for a little while and had to make the best of it. 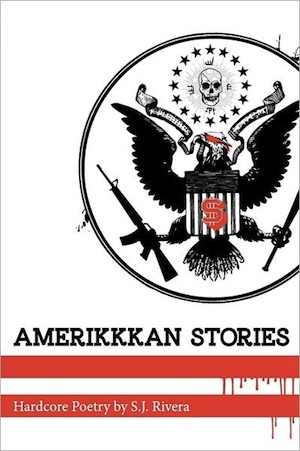 S. J. Rivera: Rough. Because of my beard they assumed the worst. I got water boarded, Kool-Aid boarded and even Bud Light boarded. It was pretty bad – after a while they had me confessing to writing 911 is a Joke by Flavor Flav.

PNS: And the book signing?

S. J. Rivera: While I was in there my agent thought it would be good for publicity to kick off the book tour on the island. I guess it was all right, there were a lot of people. All the homies were there in orange jump suits with hoods on and the staff was there to kick people in the face and stuff. Donald Rumsfeld even made a surprise visit and tortured me for a little while my books were burned. Like they say, there’s no such thing as bad publicity.

PNS: Tell us about the Self-Deportation Tour.

S. J. Rivera: I’m actually on the Self-Deportation Tour right now as we speak. I’m hoping to self-deport myself coast to coast. It’s really educational and it has the GOP’s stamp of approval, which has helped boost book sales in backwards states like Arizona and Alabama where people can’t read to begin with.

PNS: How does it work?

S. J. Rivera: I’ll either hitchhike or take the bus to places like Juarez, Cancun, Oaxaca or even Mazatlan and then work my way up to the States stopping at little bookstores here and there. It’s kind of taxing on me, especially when I have to take a raft to Florida but it’s worth it. Mitt Romney has sent me bus fare a few times, which is really nice of him. Sometimes people ask me what the hell I’m doing and I tell them that I am doing my part to keep America pocho-free by self-deporting. It’s win/win and great for sales to brain-dead bigots.

PNS: Doesn’t La Migra give you a hard time?

S. J. Rivera: Shit no. If the border guards give me any trouble I just tell them I’m Cuban and that’s when the welcome wagon comes out. People would be really surprised what happens when you tell them that. They have a red carpet, bottles of champagne, cigars, welcome confetti and free hot dogs and apple pie. It’s great!

PNS: Where can people find your books?

S. J. Rivera: The Guantanamo Bay Gift Shop has some. Most border guards carry a few copies too but if you’re not so close to the border you can find my books on Amazon, Barnes & Noble and Lulu or at a bookstore near you.